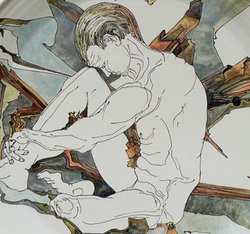 The pots Peter makes are fairly standard traditional forms which he is constantly refining.  However, the way he decorates and illustrates his work is approached much more expressively.  He has adapted the technique of tube-lining for his own purposes, effectively creating a unique "pen and wash" illustration for each individual pot.  After bisque firing, the tube-liner is used like a technical pen but, instead of ink, he uses a ceramic material which leaves a slightly raised line up to which various under-glaze colours can be flooded.  The pot is then glazed and fired to a high earthenware temperature.

The images Peter creates are mostly based on natural forms found in woodland and along the shoreline.  Recently he has also incorporated peacock feathers and patterns formed by rust on corrugated roofs.  Photographs and sketches are translated into individual abstract designs.  The result can be fairly complex with imagery from a variety of sources which are deconstructed and mixed together, similar to the way they are randomly left by the sea or the wind.  However, when it comes to translating the chosen images into a design on a pot, Peter considers the composition very carefully and, to help this, a geometric grid is drawn out to act as a guide.  His designs are sometimes intermixed with figures developed from life drawings, especially on the large platters.  The relationship between the natural forms and the figures creates a narrative which can be interpreted in various ways. 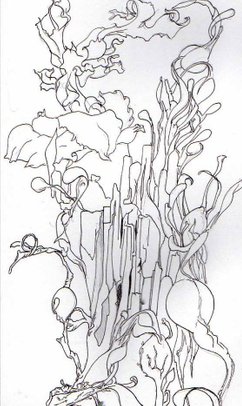 There are a number of influences on Peter's work, with some reference to potters of the late 19th and early 20th centuries as well as Chinese ceramics.

The figure drawings of artists such as Egon Schiele and Gustav Klimt, along with the compositions of Japanese print-makers, are also evident in his designs.